I’ve recently been thinking about all the different videogames that I’ve played over the years. I’ve been thinking especially about the games that have shaped me as a gamer and nerd.

The result of all this thinking was a list of 10 games that have been important to me, which I posted to Twitter. It struck me that the list formed something like my gaming autobiography. I thought it would be fun to go into a little more detail about each of my picks here.

What follows, then, is part 1 of my top 10 videogames that have shaped me as a gamer.

The first computer that we owned as a family was a ZX Spectrum. You know, the one with rubber keys and 48k of memory. (Oh how I envied friends with a Commodore 64.) The games for this machine came on cassettes which had to be loaded via a separate tape deck.

We had several games for the Spectrum which I remember fondly, including the Pac-man clone ‘Hungry Horace’, ‘Joe Blade’ and ‘Shanghai Karate’. I played these with a Kempston Joystick. However, the game that has stuck with me the most is ‘Jetpac’, which was originally released in 1983. In this game, you play as an astronaut who you guide around to collect the various pieces of his spaceship, while also shooting pesky aliens. It’s colourful, sounds fantastically old-school - although the sounds were cutting edge at the time - and has responsive controls.

Incidentally, the company that made this game would go on to make a game that will appear in Part 2 of this list. 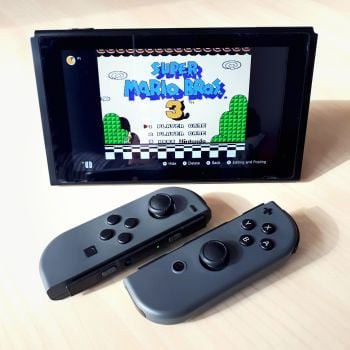 I could not wait for the release of Super Mario Bros 3. However, I did have to wait. And wait… and wait...

Europe as a region had to wait a long time for the game. I had to wait even longer than most as I had to save my pocket money for months to be able to afford it.

In the meantime, I gathered together all of the previews, reviews and walkthroughs I could find in magazines. I cut these out and pasted them into an old exercise book. I would then pour over them, reading and rereading them until I knew every detail of the game before I even owned it.

Super Mario Bros 3 is brilliant. I’ve played it again recently on the NES app for the Nintendo Switch, and it stands up remarkably well. For me, though, this game will always be a waiting game, a game of anticipation.

This game was my first real experience of a dungeon crawler. It’s possible that if I hadn’t played this when I was young I might never have been interested in playing DnD, and might not be DMing my own homebrewed campaign now.

Gauntlet II also provided me with one of my most memorable and formative multiplayer experiences. A friend and I started to play the game together one Saturday afternoon. After several hours we had reached level 82 and were convinced we were nearly at the end of the game. However, he had to go home. Without any option to save we had no choice but to leave it there. It was in its own small way a terrible moment of defeat. I think I knew even then, as I turned off the console, that I’d never get that far in the game again, and that I’d never want to try. I’d been as far as I was going to go.

This was the first game we had for our SNES. It’s also the first game that I ever remember completing. I opened all of the hidden levels, including the Special Zone levels like Gnarly and Tubular. I was extremely proud of my achievement.

When I played the game again on the Wii via the Virtual Console I didn’t match my youthful achievement. I didn’t have the patience or the unending hours to get good.

I encountered this game for the first time during my first year at university.

I had never seen any JRPG before. I certainly had no knowledge of the earlier Final Fantasy games. Nor, I think, had any of the other students in my Halls of Residence. We were, though, acutely aware of the hype surrounding this newest title. We also knew that this game was huge. I mean, it came on 3 discs!

When one of the other students bought the game the rest of us crowded into his small bedroom to watch him play. I can still remember watching wide-eyed as the opening cinematic cutscene played out, and as the members of Avalanche travelled down through the Mako reactor to battle the Guard Scorpion.

At some point during that year my parents bought themselves a PlayStation. I was therefore able to play the game myself the following summer. By the time I returned to university in the autumn of 1998 I had already completed it. I think my saved game was at 55 hours before the final fight with Sephiroth.

I am very tempted to buy Final Fantasy VII and play through it again now that it has been ported to the Nintendo Switch.

Do you have any memories of playing these five games? If so, let me know in the comments below.

You can read about the other 5 videogames that have shaped me as a gamer in a future blog post.