I have burst my left eardrum twice in my life. As a result I have lost about 20% of my hearing on that side, with most of the loss in the high end. Normally, this isn’t too great a concern and I have a hearing aid to make up the difference. I do, however, notice the loss when I’m listening to music, podcasts and audiobooks on normal in ear headphones, especially when different instruments and voices are panned to the left and right. 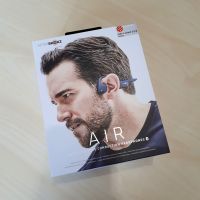 It was my audiologist who first told me about bone conduction headphones. He pointed out that they are an option for anyone with conductive hearing loss as they bypass the outer ear entirely (in my case, my perforated ear drum), instead feeding the sounds directly to your inner ear through physical vibrations on the jawbone

After much deliberation, I have recently bought the Aftershokz ‘Air’ bone conduction headphones in Midnight Blue, which are currently priced at £99.95. This is not cheap, and I had high expectations. Now that I’ve spent a week with the headphones, have they met these expectations? Yes and no.

Aftershokz markets its bone conduction headphones to athletes, and especially to those who need to retain their situational awareness like runners and cyclists. As they do not block off your ear, you can still hear things going on around you whilst wearing these headphones. Aftershokz themselves refer to this as ‘being open’. Of course, this openness isn’t only useful to people doing exercise. Rather, it is massively useful on a day to day basis. It means, for instance, that you can still hear someone call through from another room or knock on the front door whilst listening to your favourite podcast. Personally, it also means that I can listen to something without having to remove my hearing aid. 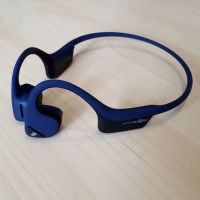 I really love the ability to listen to something on these headphones whilst still hearing the world around me. However, I do feel that my brain tends to tune out the world when I’m concentrating on the sounds coming through the headphones, and vice versa. Aftershokz do supply a pair of ear plugs for use when it is not necessary to be aware of your surroundings. These are of reasonable quality and do cause the perceived audio volume to increase significantly, although they do so at the expense of the sound quality itself, making it more muffled and heavier. There is an alternative equalisation setting to help but in my experience this doesn’t entirely solve the problem.

The sound quality was actually the first thing I noticed when trying out the Aftershokz Air. It is, inevitably, weaker than my previous in ear headphones, which were themselves only a set that had been supplied free with my mobile phone. It is, more specifically, thinner and at times a little distant, as if it is being played down a phone to you, although this is less noticeable when listening to spoken word podcasts than music. I find that I am having to turn the volume up higher than I normally would to experience a similar volume. Again, the supplied ear plugs do alter this somewhat.

If the sound quality was the first thing I noticed when trying on the Aftershokz headphones, it was the sound bleed that those around me noticed. This sound leakage is surprisingly bad, and not something that I had anticipated. At its worst it can be equivalent to playing music out loud on your mobile phone at a low volume. When I’m listening to something at even a regular volume it is possible for others to hear enough to sing along. The sound bleed is less noticeable when listening to spoken word programmes like audiobooks but is still there, especially with more sibilant sounds. 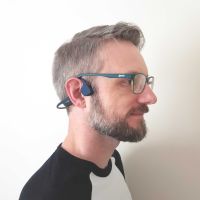 The headphones themselves fit reasonably well. They sit around the ear and press against the jaw. It is possible to feel a light vibration at times depending on the frequency and volume, and after prolonged wear I do find that I become conscious of the pressure upon the side of my face. The band that passes around the back of the head is reassuringly strong despite its flexibility, a result of being titanium. Unfortunately, this band does mean that it is awkward to wear these Aftershokz headphones in certain situations. For instance, it makes them uncomfortable to use in bed, whilst resting your head back on the sofa or armchair, or even whilst out and about with a hood up as the band is squashed downwards.

These headphones have most of the functionality that you would expect from modern Bluetooth headphones – the multifunction button allows you to pause playback and skip to the next track. You can also take calls on the Aftershokz Air, making them a possible replacement for a handsfree headset. However, given the sound leakage I would be reluctant to take a private call in public in case the other end of the conversation was overheard. They connect via Bluetooth v4.2, and I’ve certainly had no problem using them with my slightly older Samsung phone. The range is also good, meaning that I can comfortably walk around the house without having to bring my phone with me. The battery life is advertised at 6 hours, but it feels like I have got a little more than that. They charge quickly enough, in about 2 hours.

The headphones not only feel good; they look good too. The overall design is sleek and the soft touch matt finish is really nice. Whilst it will be obvious that you’re wearing them, they lack – thankfully – some of the pompous silliness of some in ear bluetooth headsets. The set I ordered came with both a soft and hard case, meaning I should be able to keep them safe at all times. They also came with a micro USB charging cable (although not a plug).

Overall, I am pleased with my Aftershokz Air bone conduction headphones, albeit with some reservations. They were expensive, but for the price you get a novel listening experience that allows you to remain aware of your surroundings. However, the sound quality isn’t always wonderful and is noticeably weaker than standard earbuds or over-the-ear headphones when playing music. Also, the sound bleed from the headphones is quite bad, to the point that I would feel self conscious if I was wearing them in a public place like a bus of train carriage.

They are, though, a great option for me given my conductive hearing loss and consequent partial deafness – they enable me to hear frequencies that I normally wouldn’t be able to detect.

I ordered my Aftershokz 'Air' bone conduction headphones from the official Aftershokz store on Amazon.co.uk. They cost £99.95. They were available through Amazon Prime.